Summary： Not far from Shanghai, in a country twon stands the palatial home of the Pang family. Old Master Pang is an addict who brings up his beautiful daughter Ruyi on opium smoke. Her older brother, Zhengda, is addicted as well, and then paralysed and effectively brain-dead. Zhongliang, Zhengda's brother-in-law, is a successful gigolo in Shanghai who seduces married older women and then blackmails them. When Older Master Pang dies, the clan elders makes Ruyi to take over the role as the head of the household. Zhongliang returns to the Pang family on the death of Old Master Pang, re-encounters Ruyi, and they are secretly attracted to each other. Wanting to seem sophisticated, she succumbs to Zhongliang's attempts to seduce her. But in the emotional maelstrom that follows - for the angry, jealous and sexually frustrated sister (Zhengda's wife) is also part of the picture... 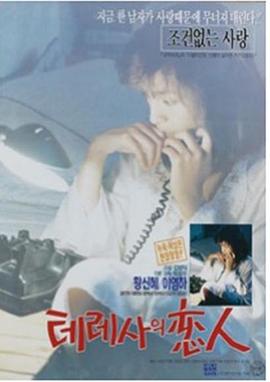 Theresaui yeonin
Byeong-deok falls in love with a newly hired announcer at the radio station where he works and the two share a night together. However, because of her distress over their love affair and the effect on Byeong-deok's family, Theresa quits her job. Byeong-deok emigrates to the US with his family for a new start, but he has trouble forgetting Theresa. He makes plans to abandon his family and return to Korea to locate his lover My Nights Are More Beautiful Than Your Days
Lucas has invented a new computer language but at the same time he has been informed about his strange terminal illness during which he has been gradually losing his memory. Shortly after that he meets Blanche who acts as a medium in a bizarre traveling show. Dying Lucas follows her to the sea resort where they spend together several days and nights. Sea Cat
Yoshimitsu Morita (Lost Paradise and Like Asura) directs the big screen adaptation of Shiho Tanimura's book, Umineko ("Sea Cat"). Set in a northern coastal village, the film revolves around a fisherman's wife who finds herself attracted to her brother-in-law, while at the same time still wrapped up in her husband's love. This beautiful romance stars Misaki Ito (Ju-On: The Grudge, Densha Otoko), Koichi Sato (Spiral), and Toru Nakamura (Gen-X Cops, Tokyo Raiders, 2009 Lost Memories). With several box office successes under his belt, Yoshimitsu Morita knows what audiences like, and Umineko is no exception! The Zoya Factor
Based on Anuja Chauhan's novel, Zoya Factor is a rom-com about Zoya, an advertising agent, and her relationship with the captain of Team India, Nikhil Khoda.