Love is the most beautiful

Summary：Ma Jinkui (Zhang Guoli decoration) is a sports teacher in a middle school in Dalian. Recently, he is a little upset. Xiaocan, his daughter, is about to enter the marriage hall. In order to let relatives and friends see the happy side of their family in the shop, Qui Ge has been dating everywhere, but he has been running into a wall one after another. He was not satisfied with his work. Zhang Zude (Liang Tianzhuang), the principal, recruited Niu Xiaobei, a young sports teacher, and urged Lao Ma to retire. Quigo was indignant and struggled with Xiaobei everywhere. Little did he know that the young man was her daughter's boyfriend. In the meantime, Quigo also bumped into a friend named Niu Mei (Jiang Wenli decoration), who is Xiaobei's aunt and relative, and also a senior executive of a car brand, known as ghosts and sorrows. It's not that friends don't get together, but that Quigo enters a beautiful company to apply for a job by mistake. The two men had more trouble breaking up their children's marriage. But in the process, they are drawn closer and closer by an invisible line... Broad bean

Ruler: Master of the Mask
Set in the 18th-century Joseon, it tells the story of Crown Prince Lee Sun and his fight against a powerful and wealthy organization Pyunsoo hwe, who controls the country behind the scenes.... Flyin' Dance
Tai and Choi are both fans of the internet, but they use it for different purposes. Tai uses it to chase women, while Choi uses it as to escape from reality, isolating himself from all ... Indochine
This story is set in 1930, at the time when French colonial rule in Indochina is ending. A widowed French woman who works in the rubber fields, raises a Vietnamese princess as if she was ... 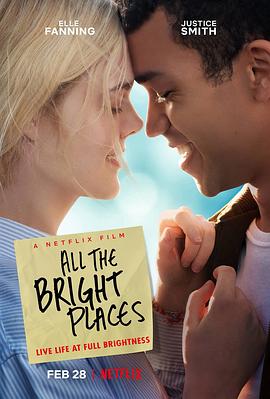 All the Bright Places
The story of Violet and Theodore, who meet and change each other's lives forever. As they struggle with the emotional and physical scars of their past, they discover that even the smallest places and moments can mean something. Best Arrangement
Zhao Zihui, 26, graduated from graduate school and worked in YDH, the world's top 500. Character tolerance, independence, self-esteem is very strong. She made the best arrangements for herself, a small house of her own, an opportunity to go to Paris headquarters for further study, a matching love... To achieve her goals, she strictly adheres to a three-year plan that is accurate enough to do what she wants to do every hour. Yan Ruozhou, an admirer of his superior, came to an abrupt halt because of the return of his ex-wife, Lu Qian, and his work was in a dilemma. But it happened that Xu Tian met this huge "accident" at this time. Zhao Zihui initially did not approve of Xu Tian and his business plan, but gradually fell in love with Xu Tian's sense of belonging. Reasonable planning clashes with sudden love, and she becomes frustrated. She met death as well as love. She made what she thought was the best arrangement for herself and Xu Tian. At last, I realized that the days are full of variables and there is never the best arrangement. Military surgeon
Lin Wuge (Deng Chao) and Guo Sanmei (Li Xiaoran) are a couple of young plum and bamboo horse lovers. The three sisters are making positive progress. They only want to be a good doctor. They have different choices in their life paths. The snobbish Guo father wanted to marry his three sisters to a big warlord as his aunt, but refused the Five Brothers'proposal. Three sisters fled to marry in the rainy night and devoted themselves to the revolution. Guo Father was afraid of making his family ugly and pretended that the three sisters had been hanged to death. Warlords learned of the death of their third sister and robbed their second sister. At the critical moment, Five Brothers came forward and called their second sister their fiancee. Five brothers married their second sister in order to save the Guo family and their second sister from accidents. After marriage, they lived a quiet life. The kind two sisters were tender and considerate. They silently supported and took care of the five elder brothers. The five elder brothers also fulfilled their duty to the family wholeheartedly, but the thoughts of the three younger sisters always lingered in the hearts of the five elder brothers. After joining the New Fourth Army, the three sisters returned to their hometown to collect medicines. Knowing that the five elder brothers and their sisters had married and had children, they had to keep their feelings in their hearts. The sudden appearance of the undead lover disturbed the peaceful life of the Five Brothers. The Five Brothers tried their best to support the revolutionary work of the Three Sisters in order to express their endless love for them. At the end of the play, the second sister was kidnapped by the Japanese army to save Five Brothers. The third sister fell under the gun of the Japanese army. Five brothers finally took up arms and went to fight for their families and nationalities in the anti-Japanese battlefield. Love is back
An accident made Ming Liang (Qi Wei decoration) and Gao Shen (Chen He decoration) become friends and confidants who do not know each other. They have the same concept of love and marriage, and become "one-night couples" who warm each other. With the passage of time, the growing feelings between the two people will be out of control. At this juncture, can they abandon the old principles and come together bravely? The unexpected pregnancy of Baoniao (Mao Xiaotong decoration) made her and Wan Siqi (Wang Chuanjun decoration) decide to marry. However, on the day of receiving the certificate, the unfortunate abortion of Baoniao immediately made this marriage an indispensable chicken rib. Yu Xiaonuo (Jiang Yan decoration) suffers from her boyfriend Chenglei (Qiao Renliang decoration) having no money and no power, and decides to look for Gao Fu Shuai to "abandon darkness and cast light". At this time, Cheng Lei became famous overnight, but his relationship with Yu Xiaonuo can never return to the past. Broad bean You Are My Sunshine
Seok-joong, a farmer in his mid thirties, is desperate to find a wife and settle down. After backing out of a scheme to set him up with a Filipino bride, he falls head over heels in love ... Downton Abbey
Mary is still inconsolable six months after Matthew's death, Edith agrees to go the Germany for Michael's divorce, Molesley looks for a job, and there is a surprise applicant for Ms. O'Brien's job.
Sidebar Filters
Images
MuXiv Music
Thank You for Sharing!